Scars and seals after blepharoplasty 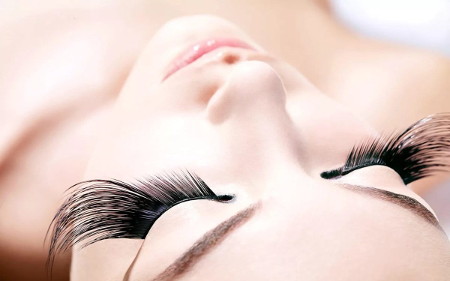 Blepharoplasty is one of the safest and least traumatic operations in plastic surgery, arousing undiminished interest. But, like any other plastic reconstruction, eye lift is associated with the risk of complications. Patients are especially frightened by the likelihood of skin scars. Doctors of the Clinic of Plastic Cosmetic Surgery in Poltava know how to prevent the occurrence of undesirable effects after blepharoplasty and how to deal with them if any.

When scars will be healed up after blepharoplasty

When performing blepharoplasty, surgeons make small incisions along the natural eyelid crease in order to improve their shape. And although the intervention is minimal, fresh scars need time to resolve.

This process proceeds individually, taking about 10-12 weeks from the day of the operation. The rate of recovery is influenced not only by the regeneration age peculiarities, but also by the location of the incision. In the eyelashes growth zone, the lift surgery wounds are closed faster than in the upper eyelid due to a more active blood supply. Three months after the plastic surgery, the incision sites are smoothed and brighten, becoming indistinguishable from the rest of the eyelid skin. If the appearance of blepharoplasty scars continues to cause concern in three months after the lift, you should consult a doctor for treatment of undesirable consequences.

The only way to avoid scarring after a lower lid lift surgery is to provide transconjunctival access to the tissues during plastic surgery through the eye mucosa.

How to prevent the appearance of scars?

The main causes of impaired scar healing or the occurrence of indurations after blepharoplasty:

The presence of underlying risk for the formation of keloid scars is checked at the stage of preparation for surgery. And the fulfillment of the doctor’s prescriptions falls on the shoulders of the patients themselves. To avoid complications after blepharoplasty, you must: 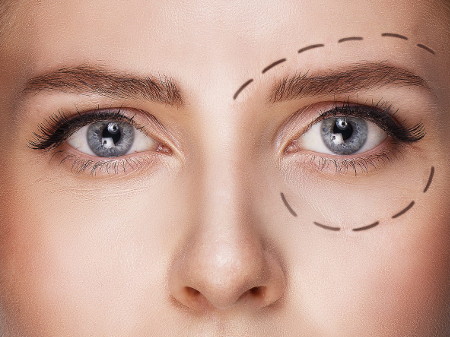 With compliance of all the recommendations, the risk of scarring after blepharoplasty is minimized.

How to remove postoperative scars

If the eye lift did lead to undesirable consequences, the doctor may suggest several options for resolving the problem, including conservative, hardware, and operational techniques.

It is possible to accelerate the resolution of scars after blepharoplasty by applying silicone-based ointments and other preparations promoting regeneration.

Among the hardware techniques in the elimination of the effects of lifting the most effective technique is laser resurfacing. Laser resurfacing helps to remove not only the scars, but also many of the signs of impending aging due to the removal of the skin upper layers and stimulation of tissue regeneration.

The Clinic of Plastic Cosmetic Surgery in Poltava has its own patented method of fighting against scars on the eyelids, against the consequences of blepharoplasty, including surgery with cartilage allogenic graft transplantation.

Why do indurations appear after blepharoplasty?

The appearance of scars after lifting is more often observed on the lower eyelid, but the upper one is also subject to a similar issue. An increased risk of disrupting the natural scar healing process can be caused by:

Chirapsia, stretching, strong massage of the skin in the surgery area can also lead to indurations around the sutures. This is due to the chaotic arrangement of collagen fibers in the young scar, which does not allow the edges of the wound to resist stretching.

In order to prevent such a situation, surgeons recommend patients who have resorted to blepharoplasty to apply strip-patches after eye lift and to avoid touching their eyelids for a couple of weeks. Physical impact is accompanied by blood flow and acceleration of collagen production, which prevents resorption of the accumulated connective tissue. If this happens, and instead of a thin scar a few months after blepharoplasty there is a rough, ugly scar formed, you should contact your surgeon.

Give up on self-treatment. Fulfillment of medical recommendations is a guarantee of quick healing and resorption of scars. Observing the tissues condition after the lifting, the surgeon can prescribe wound-healing, anti-scar drugs, physiotherapy procedures (irritative current therapy, lymphatic drainage).

To speed up the resorption of scars, the doctor may prescribe injections of glucocorticosteroids or topical preparations after healing of the cuts. In case of failure of conservative treatment for 2-3 months after eyelid lifting, the doctor may recommend surgery to remove excess connective tissue in the scar.

It is worth remembering that the regeneration processes are different in each body, so in some cases the scar healing process after blepharoplasty can take up to six months.

Nodules at a suture resorption site 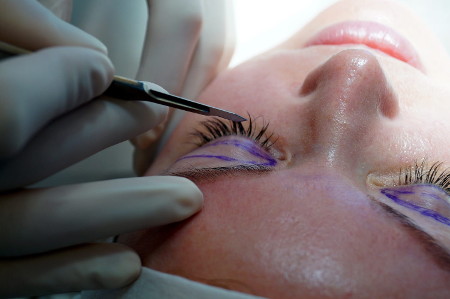 For minimal traumatizing to the tissues of the eyelid at the wound edges approximation after lifting, most surgeons use fine suture with round bodied needle, dissolvable in two weeks to two months. In case of normal recovery after blepharoplasty, the indurations disappear as the suture dissolves. But the nodules may remain in the future due to:

The most common cause of the problem after plastic surgery is the superficial sutures arrangement, leading to their partial, rather than complete resorption. For elimination of consequences, it is enough to remove the residual suture from the scar.

While preserving the swelling, a careful massage of the eyelids will help to correct the situation; the attending physician will show you the technique of the procedure. And if the problem persists for more than 2.5 months from the day of the lifting, the surgeon can make point cuts in order to remove the remaining sutures from the scar or prescribe injections of preparations for sutures absorption.

When correcting the shape of the eyelids with lipofilling along with blepharoplasty, an uneven distribution of adipose tissue or poor treatment of graft can cause the formation of fat indurations. They are especially noticeable under the extremely delicate skin of the lower eyelid.

Such a complication may disappear through some time after a lifting, but an unfavorable outcome is also possible. Removal of fat cells nests is carried out by:

The optimal treatment for each patient is determined by the plastic surgeon.

In some cases, blepharoplasty leads to the formation of cysts around the scar. Fluid-filled cavities occur when the edges of the wound are improperly treated because of the immersion of the skin areas into deeper tissues when suturing.

The gradual fluid accumulation is accompanied by an increase in the defect in the volume (up to 0.5 cm). The eyelid induration may disappear on its own within 1-3 months after blepharoplasty, but in case of further keeping of its formation, it should be surgically removed.

Doctors of the Clinic of Plastic Cosmetic Surgery in Poltava are always ready to help in scars removing or in other eye lift complications eliminating, so that your eyes will soon shine with unbiased joy.

Tags: Rehabilitation after plastic surgery, Plastic eyelids
Sign up for a consultation
Get personalized doctor recommendations!

Should I do circumcision as an adult?
Posthetomy or circumcision is a compulsory procedure that men who practice the Jewish religion or Islam undergo. But not only religious reasons make men do circumcision of foreskin. A lot of men undergo surgery under the influence of medical factors, hygienic reasons or aesthetic preferences for the type of penis. With the correct performance of the circumcision, the risk of complications is minimal, recovery after surgery is quick and almost does not cause any pain.
Facts about beauty injections that are worth knowing?
Modern aesthetic medicine offers many ways to preserve youth and beauty of the skin. One of the most common anti-aging techniques is considered biorevitalization, which successfully competes with plasma lifting, botox, mesotherapy and other injection techniques. But before you sign up for the procedure, you should know what it is and what effect you can expect.
Should I be afraid of scars after the facioplasty?
Surgical lifting has long been considered the most effective way to rejuvenate, allowing you to get rid of wrinkles, to return the face clear beautiful contours. But not a single operation is complete without cuts, stitches, and therefore without scars. One of the main tasks that the surgeon faces during the intervention is the need to make the scars as invisible after healing as possible.
How to correct the shape of the chin without surgery?
A beautiful face has the right proportions, a delicate balance between the frontal, middle and submental parts of it. If the balance is disturbed in the chin area, the problem can be corrected. To do this, do not necessarily go under the knife of a plastic surgeon. Modern aesthetic medicine offers a number of non-surgical methods for correcting the shape of the chin area, aimed at increasing or decreasing it.
How is it possible to remove the hump on the neck?
Thin and elegant neck, as well as proudly straightened shoulders, force to pay attention to the person, thus emphasizing confidence and attractiveness. But correct posture is not only one of the criteria of beauty, but also a guarantee of good health.
x
Make an appointment
You can fill in an advanced form