Contents
More about removing fibroid
When is surgery needed?
Surgical removal of fibroids - preparation and course of the operation
Recovery period and existing risks
How much does it cost to remove fibroids?
Similar services
Other services 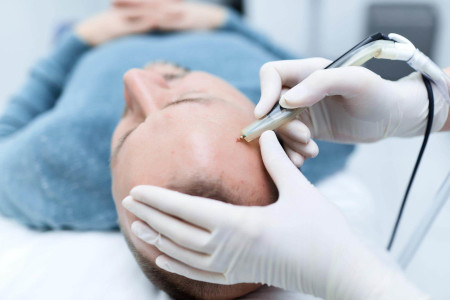 Neoplasms on the skin, especially on the face and open areas of the body, cause physical and psychological discomfort in a person. Their possibility of degeneration into malignant forms does not add optimism either. One of such formations is fibroma, which is easily removed by the qualified surgeons of the clinic at a reasonable cost. Surgeries to remove hygromas, wen, moles and other skin growths are safe and effective procedures.

Fibroma is a small tumor of benign connective tissue cells. However, under unfavorable circumstances (trauma, ultraviolet light), it can turn into a malignant form. The fibroma protrudes above the skin, smooth and dense to the touch, usually has a wide base, rarely a small leg.

In medicine, a distinction is made between:

To get rid of a build-up, as well as from a lipoma, is possible only by surgical methods. Especially if it is deep and voluminous. The lesion is excised under local anesthesia on an outpatient basis.

When is surgery needed?

You need to get rid of all types of fibroids for the following reasons:

When is it better not to have an operation:

An appointment for a consultation with a specialist in Poltava for patients from Kiev, Kharkov and other cities of Ukraine can be made on the clinic's website. During the appointment, you can find out the general order of prices, as well as clarify how much fibroid excision costs in this case.

Surgical removal of fibroids - preparation and course of the operation

No special preparation is required before the procedure. If there are no contraindications, the operation, which takes 15 to 30 minutes, can be performed on the same day under local anesthesia.

How does the intervention take place:

Surgical excision of the fibroma provides a good cosmetic effect, without the risk of recurrence in the future. Since all damaged and altered cells were removed during the operation, re-formation of fibrosis in the future in this place is excluded.

Rehabilitation after surgery is short - only 1-2 weeks, depending on the volume of the intervention. Without a bandage, the wound should be treated with an antiseptic and not soaked for a week. Postoperative recommendations include the traditional ban on the sun, baths, saunas, solariums, swimming pools. Touch the impact site less and protect it from injury.

As testimonials testify. If the patient turns to the surgeon in a timely manner and the intervention was carried out professionally, then the risks of complications, relapses and malignancy tend to zero. But, in case of non-observance of the doctor's advice after the operation, it is possible that a secondary infection is introduced into the wound, suppuration and deterioration in general well-being. So, if swelling has formed, severe pain appears and the wound gets wet, you should immediately consult a doctor for appropriate treatment.

How much does it cost to remove fibroids?

Such an intervention in the Clinic for Plastic Cosmetic Surgery is not a very difficult and affordable manipulation. You can find out the exact price for this or any other procedure with a cosmetic effect, for example, removal of spider veins, on the website or by phone. Consultants make an appointment for a preliminary examination of both residents of Poltava and Kiev, Kharkov and other nearby settlements of Ukraine.

Surgeons of the highest category with extensive experience, modern effective and safe methods of plastic surgery, innovative equipment and compliance with all aseptic and antiseptic measures make the clinic the leading in the region!

Prices for removal of fibroids