Mammoplasty: when will the implants go down? 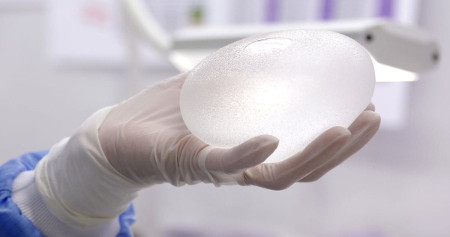 Striving for perfect shapes is natural for any woman. When the natural forms do not satisfy the woman, and physical exercises, cosmetology procedures and other methods are ineffective, the mammoplasty, liposuction and other achievements of plastic surgery come for assistance.

Breast augmentation is one of the most popular plastic surgeries, which allows to give the desired volume to the bust and give self-confidence to the woman. Quite often immediately after the procedure the implants are located above the natural level. This unpleasant temporary effect usually occurs after submuscle placement of silicone implants. The bust will occupy its place by the end of the postoperative period. Usually the return of the breast to the normal position takes from four months to half a year. During this time the pectoral muscles relax, the implant descends, the lower part of the mammary gland gets natural roundness, and the upper pole loses unnatural completeness.

Asynchronous descending of the implants 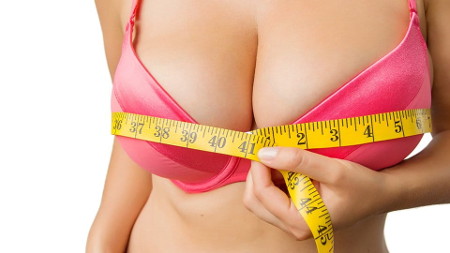 It is quite unpleasant for a woman to find out that she looks asymmetrically after breast augmentation, as one of the implants is positioned above the other one. This is caused by a slower descending of the silicone implant located at the dominant side. This is observed because of the more pronounced volume of pectoral muscles on the corresponding side of the left- and right-handed persons. The problem goes away naturally during the first few months of the postoperative period.

Unnatural placing of a bust and superfluous volume become more noticeable because of the edema after operation, which especially manifests itself in case of submuscle placement of an implant by the surgeon.

When will the implants go down?

The implants require some time to occupy their places after the operation. The breast looks especially high and full during the peak of swelling in the first 2-3 weeks of postoperative period. Although the swelling gradually decreases in a term of one and a half and up to three months and the mammary gland looks more symmetrical and natural.

How can the process be accelerated? 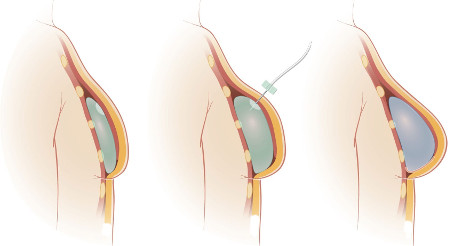 In order for the implants to go down to their original position as quickly as possible, the surgeons recommend relaxing massages and exercises. Easy pushing the pectoral muscle along the implant boundaries is especially useful, but be careful not to shift the silicone implant. You may perform massaging moves three or four times a day during the first month of rehabilitation.

Compression underwear enables engraftment of implants in the right position that contributes to fast normalization of blood circulation and elimination of swelling.

The compression underwear promotes descending of the bust by means of the two clasps. One of them is located under the breast, and the second one is located above it. The top clasp can be moved onto the back to reduce the pressure on the silicone implant.

It is worth forgetting about the bras with push-up or hard bones for the whole rehabilitation period, since they interfere with the normal healing of seams and lowering the breast to its place.

Only when you follow all the recommendations of the surgeon you will be able to assess the effect of lifting and breast augmentation in the shortest possible time.

Breast augmentation before or after childbirth: we are going to answer your questions
Thousands of women of all ages are unhappy with the shape and size of their breasts. There is a lot of women that are disappointed with their own forms among the new moms, because the lower part of the abdomen begins to protrude gracelessly after childbirth, and elastic girlish bust often loses volume and hangs down. It is not always possible to solve this problem with the help of physical exercises and prevention methods. Then the mammoplasty steps into the breach.
The International Medical Aestetic Synergy Congress (MASC)
The International Medical Aestetic Synergy Congress (MASC) is a grand scientific event that, on June 1-2, 2018, gathered together the best practitioners from around the world in the capital of Ukraine.
Selection of plasty with local or general anesthesia
The desire to get rid of their own defects leads more and more patients not only to cosmetologists for the course of plasmolifting or injections of beauty, but to plastic surgeons as well. The subject of discussion includes the desired parameters of face and body correction, duration of surgery or rehabilitation period as well as anesthesia. The question of the sensitivity level during surgery or fear of pain often only prevents the patient to decide on the profound changes.
Contour plasty: lipofilling or fillers?
Is it possible to turn time backwards? It may seem too many that the answer to this question is obvious. In fact, when it comes to women's beauty, everything is possible. In fact, modern methods and preparations allow to return youth and attractiveness in a few minutes. What is the essence of contour plasty? Contour plasty of the face is a reliable method of combating age-related changes.
Implants for rhinoplasty: types, pros and cons
Plastic surgery can drastically change a person's life. It allows reaching the generally accepted canons of beauty or eliminating the consequences of accidents and traumas. Today medicine successfully incorporates not only natural materials (cartilage tissue of the patient), but artificial ones as well. When is the implant necessary? The implants are often used to achieve the desired result in modern rhinoplasty.
x
Make an appointment
You can fill in an advanced form