Contracture after mammoplasty: reasons and what to do? 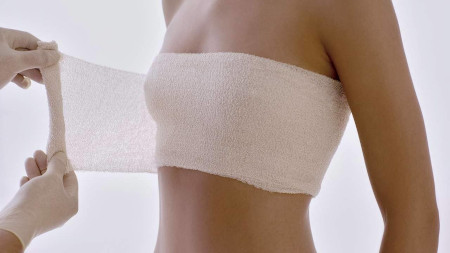 Plastic surgery helps to radically solve the problem of appearance, so they resort to it in cases where aesthetic procedures do not give the desired effect. Breast augmentation surgery is the first in popularity among women. Plastic surgery can cause complications, both general and specific. In 10% of women, a side effect such as contracture may occur. To get rid of such consequences, you need to contact the clinic.

What is contracture and its causes

Breast augmentation surgery involves the installation of implants in the area under the mammary glands. At the same time, the patient’s body reacts quite naturally to a foreign body around the prosthesis, connective tissue begins to accumulate, growing into its surface. This is a normal reaction in all operated patients. Normally, the thickness of this connective tissue around the implant should not exceed 1 mm.

Contracture is the formation of a capsule of dense connective tissue around the prosthesis, which presses and deforms it. This phenomenon may occur after implantation of any foreign bodies in any part of the body. In case of fibrosis, after mammoplasty, the breast loses its initial postoperative form, painful sensations appear. The thickness of the seal in this case reaches several millimeters.

Experienced surgeons cannot predict whether a particular patient will have such a reaction and complication, this is due to various reasons and always individually. The main danger of contracture due to compression of the prosthesis is the risk of rupture, which will entail serious consequences for the health and even life of the patient.

Fibrosis and capsule formation in the implant area are associated with the appearance of hematomas, injuries, infection or damage to the breast, both during mammoplasty and after it.

The causes of complications in the form of contracture with breast augmentation:

Today, mammoplastics use modern silicone implants with a raised surface. If the operation used outdated smooth endoprostheses, they provoke the development of fibrosis and the formation of compaction.

Symptoms of capsular contracture after mammoplasty

During the first year, breast deformity can be detected. It can occur on one side or on both breasts. In some cases, contracture appears later in a few years. At the first stage, the breast becomes denser to the touch, then its shape changes from deformed to unnatural spherical.

At different periods of detection of complications, one can distinguish the following degrees: 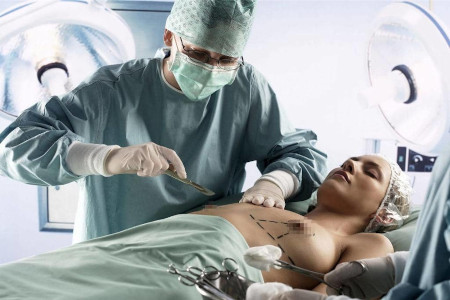 Both cases are equally hazardous to the patient's health and require immediate intervention. If we consider both degrees in stages, we can distinguish the following stages of development of contracture:

Symptoms of the pathology can be detected visually and during the examination of palpation, ultrasound or MRI. At the last stage, the breast is deformed, loses its original appearance, as after surgery, the presence of prostheses is even visually noticeable. There is no such side effect when carrying out an aesthetic breast lift when implants are not used.

Is contracture dangerous after breast augmentation

The contracture is manifested not only by tightening of the chest and painful sensations, but also by its deformation, which nullifies all the efforts of doctors to correct the figure. Visually and to the touch, clearly identifiable implants deprive self-confidence and mutilate a woman. In addition, the resulting capsule presses on the prosthesis and can provoke its rupture in the future.

The danger of capsular contracture is at risk of rupture of the endoprosthesis and silicone getting into the blood, infection of adjacent tissues. To prevent such consequences, as well as to correct a side effect, to return the previous shape of the breast, you need to consult a surgeon and fix the defect.

During the operation to correct the problem, anesthesia is used, and this is still a load on the body. To avoid such complications, one should adhere to the rules of rehabilitation and not go to unknown dubious clinics for breast augmentation.

Fibrous densification can be eliminated without surgery, if you apply at an early stage of the manifestation of complications. At the first signs of an increase in breast density, you should contact the clinic, where physiotherapy will be prescribed to smooth out scars. At the initial stage, massage, taking vitamin E, a complex of anti-inflammatory injections will also help to stop the capsule compaction process.

If the patient asked for help at stages 3-4 of the pathology, an operation is performed. To choose the methodology for the operation, it is necessary to undergo a diagnosis of the condition to have an MRI or ultrasound scan, undergo tests, undergo an examination with palpation by the surgeon.

There are 3 methods of treating contracture that are used, depending on the condition and indications: 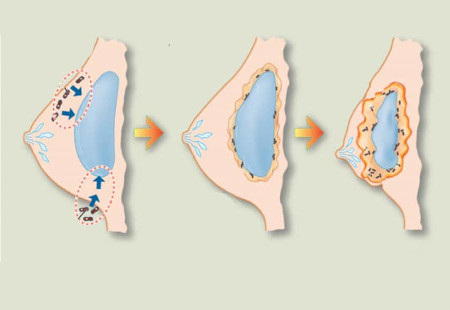 The choice of treatment method depends on many factors, both on the stage of development of the complication and on concomitant diseases, contraindications, individual reactions. If the patient has rejection of the prosthesis and antibiotic therapy does not help, it is removed. It will be possible to establish a new one only after rehabilitation, when the body will be completely healthy, and the doctor will establish the cause of this side effect.

To avoid the occurrence of such a complication as capsular contracture, it is worth initially contacting the clinic with a good reputation. Only a properly selected implant of the required size and shape, as well as the accurate and clean operation of the surgeon will reduce the likelihood of inflammation and fibrosis. If the operation was performed by a competent doctor using advanced technologies and in complete sterility, and the patient followed the rules of postoperative rehabilitation, the likelihood of such a side effect will be reduced to 0.2 2%.

In the FAQ section, you can read patient reviews and surgeons' advice for those who have already passed or are just planning to undergo a mammoplasty operation. We recommend that patients select prostheses of the appropriate size to avoid negative consequences.

You should adhere to the rules and measures that will help avoid the appearance of capsules and scars:

Plastic surgeons advise you not to delay a visit to the clinic at the first sign of chest tightening, even when there are no visible changes. Thin women with thin skin on their breasts are advised to use gel implants.

You should monitor the condition and change of the breast during pregnancy, after childbirth and during breastfeeding, as hormonal surges can also lead to contracture.

Is it possible to do mammoplasty with mastopathy
Mammoplasty gives women the opportunity to add roundness and increase the volume of the breast, give confidence and finally find the desired size, and also helps to correct the effects of injuries or operations on the mammary glands. But there are situations that the diagnosis of fibrocystic mastopathy is already detected during examinations to prepare for the operation, and what to do in such a situation. Is it possible to carry out mammoplasty and whether it will harm health.
Birthmark on the head - can it be removed?
A mole on the head is a common occurrence that is absolutely safe. If you do not injure her. Many people feel discomfort is difficult to comb, it is inconvenient for a haircut, especially for those who are used to cutting their hair briefly, fear of malignant transformation due to open exposure to the sun. You can also inadvertently damage the nevus during shampooing or headgear.
Wrinkles at 25: causes and methods of correction
Experts have determined that the aging process begins in the skin from 25 years old. Of course, you are unlikely to see deep and noticeable wrinkles, but to use all means to prevent the development of more serious changes is the natural desire of every woman. Beauty injections (dysport, hyaluronic acid), the selection of nourishing and moisturizing agents, rejuvenation with the help of modern technologies will help to delay aging for a long time and maintain a fresh and radiant skin look.
Fatty hernias under the eyes: causes and how to get rid
Hernia under the eyes is not a rare phenomenon. Internally, they practically do not affect the well-being of a person and the quality of his vision, but their presence can become signs of problems within the body. Outwardly, the bags under the eyes look unattractive, make the face tired and add age. Causes of the appearance of fatty hernias under the eyes The bags under the eyes have a very natural explanation and it speaks of skin aging.
Features of breast diagnosis before and after plastic surgery
Any surgical intervention requires a preliminary examination. This makes it possible to correctly assess the patient's condition and avoid possible negative situations or consequences during operations. Mammoplasty is no exception. Also, a large number of questions arise about the reliability of breast examinations in the presence of an implant.
x
Make an appointment
You can fill in an advanced form